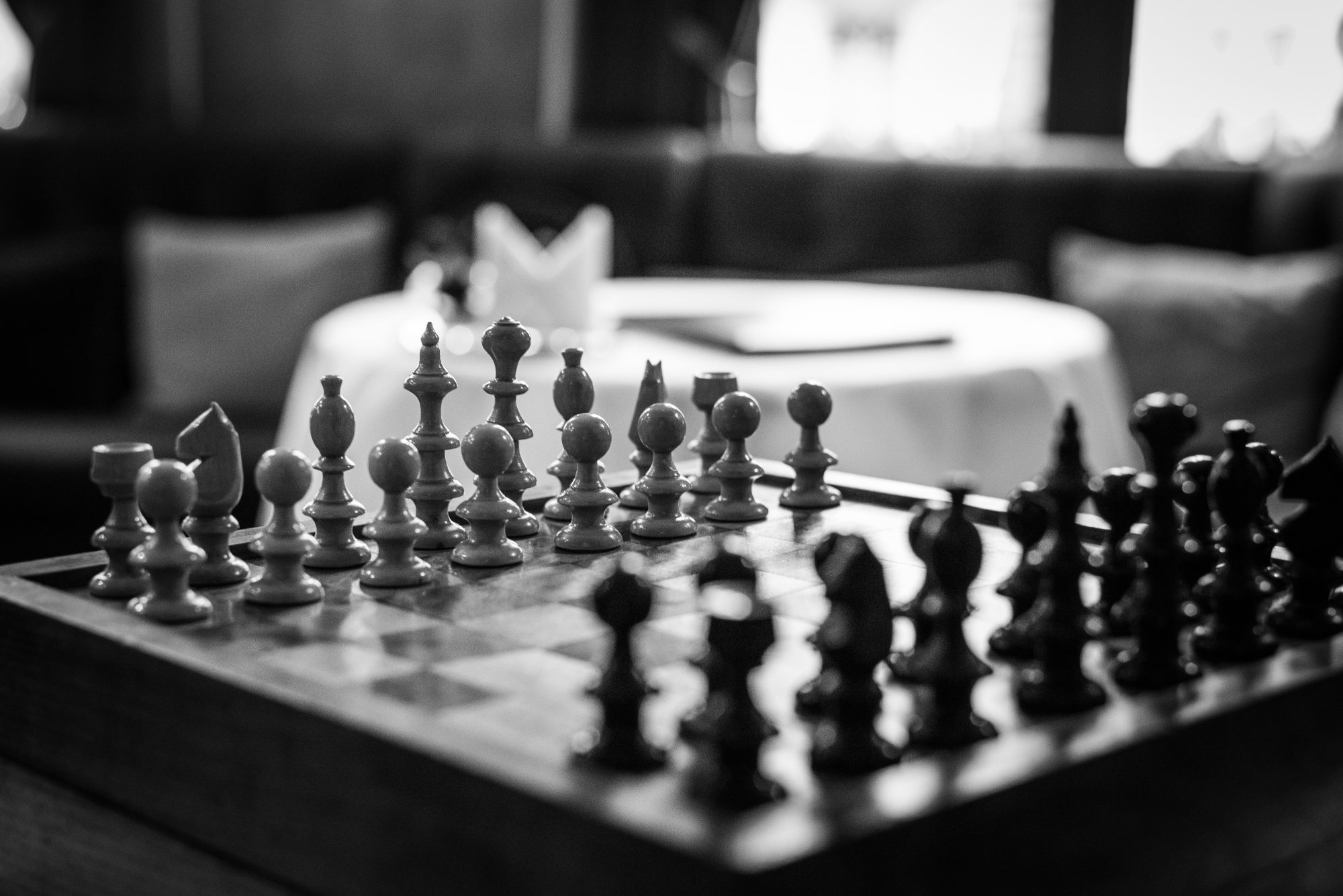 By Justin Park. Justin is the campus liaison for Biola KCM and currently the Assistant Pastor at Jubilee Presbyterian Church of Irvine.

Not very confident in your ability to defend your faith? Here are some missional and practical ways to defend the hope of the Gospel.

(Much of what has been laid out has been taken from Tim Keller’s Reason for God, which I HIGHLY recommend reading.)

Here are the two goals that I’ve laid out to accomplish the main purpose of this seminar, which is to build some confidence in your ability to defend your faith: (1) Provide reasons to engage in apologetics, (2) Provide a quick overview of apologetics.

Reasons for Defending Your Faith

So, what are the reasons why we engage in apologetics? Is it necessary? What if I don’t like arguing? First and foremost, the main reason for defending our faith is because as Christians, we are called to it in Scripture. In his first epistle, Apostle Peter exhorts Christians who were confused and discouraged by the persecution and suffering they were encountering because of their faith back in the mid-60s A.D. He says to the elect exiles:

But even if you should suffer for righteousness’ sake, you will be blessed. Have no fear
of them, nor be troubled, but in your hearts honor Christ the Lord as holy, always
being prepared to make a defense to anyone who asks you for a reason for the
hope that is in you; yet do it with gentleness and respect […] (1 Peter 3:14-15)

This exhortation also applies to Christians today. We must always be prepared to make a defense to anyone who asks you for a reason for the hope that is in you. It is a privilege that the Almighty God uses broken people to bring about His work in the heralding His Gospel to all the world. In fact, Christ himself commissions all his followers, “Go therefore and make disciples of all nations […]” (Matt. 28:19). He uses people to bring about the conversion of people. Amazing!

Some may think of this commission as a heavy burden to bear but let this be of comfort: Although God uses people to bring to fruition His plan of conversion, it is ultimately God Himself who unveils the hearts of men to see Him. It is not the strength of our intellect or our ability to craft a “perfect” argument. As Apostle Paul importantly encourages us:

What then is Apollos? What is Paul? Servants through whom you believed, as the Lord assigned to each. I planted, Apollos watered, but God gave the growth. So neither he who plants nor he who waters is anything, but only God who gives the growth. (1 Cor. 3:5-7)

Don’t forget Peter adds, “yet do it with gentleness and respect.” Nothing turns someone off more than you being overly argumentative and straight up disrespectful. 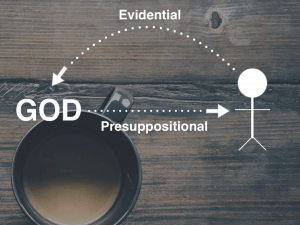 What is Apologetics? It is the theological science or religious discipline of defending or proving the truth of religious doctrines through systematic argumentation and discourse. Simply, it is the defense of your faith. There are many types of apologetics but the two main types we will be covering is (1) Evidential Apologetics, and (2) Presuppositional Apologetics.

The difference between the two? One way to explain is through this diagram I’ve created. Evidential Apologetics (EA) works through finding some commonality with the unbeliever, then providing evidence in order to prove that God exists. Presuppositional Apologetics (PA) does the opposite. It presupposes that the Bible is God’s Word and attempts to show that unless you first understand that God exists and that God’s Word is Truth, nothing else makes sense in the world. I’ll provide examples in each section.
Evidential Apologetics

Evidential apologetics emphasizes the use of evidence to demonstrate that God exists. This 2 is most likely the apologetic most readers are familiar with. For example, say someone says to you, “The Bible is very historically unbelievable; there’s no proof.” In response, you would look to provide evidence that the Bible is historically accurate, such as extra-biblical sources that prove that the records of Scripture align with their recordings of history (plenty of sources, google it!).

Presuppositional Apologetics is reasoning that the Christian faith is the only basis for rational thought. It presupposes that the Bible is divine revelation and attempts to expose flaws in other worldviews. What is a presupposition? Presuppositions are simply beliefs that everyone has that affect how they think, view the world, interpret evidences, etc.

For example, say an evolution believing atheist asks you, “How can a good God allow evil and suffering?” A presuppositional response would be “Where do you get your basis for good and evil? How do you know what is good? What is evil? Where did you get this standard? C.S. Lewis, an active atheist before becoming a Christian, shows how this argument falls on its own standard in Mere Christianity:

My argument against God was that the universe seemed so cruel and unjust. But how
had I got this idea of “just” and “unjust”? … What was I comparing this universe with
when I called it unjust? … Of course I could have given up my idea of justice by saying
it was nothing but a private idea of my own. But if I did that, then my argument against
God collapsed too–for the argument depended on saying that the world was really
unjust, not simply that it did not happen to please my private fancies … Consequently
atheism turns out to be too simple.

And to this, Tim Keller summarizes Lewis’ comment in Reason for God:

Lewis recognized that modern objections to God are based on a sense of fair play and
justice. People, we believe, ought not to suffer, be excluded, die of hunger or
oppression. But the evolutionary mechanism of natural selection depends on death,
destruction and violence of the strong against the weak–these things are perfectly
natural. On what basis, then, does the atheist judge the natural world to be horribly
wrong, unfair, and unjust? The nonbeliever in God doesn’t have a good basis for being
outraged at injustice, which, as lewis points out, was the reason for objecting to God in
the first place.

At the heart it, a presuppositional response seeks to ask the question, “How do you know this?”, or “Where did you get that understanding?” It seeks to show the unbeliever that unless we receive our standard from God, it just doesn’t make sense.

Even with all these well-crafted arguments memorized, they may not “work” to convert people. So what is the best proof of Christianity? Ultimately, I believe that the way in which Christians live their lives as a witness to the truth of the Gospel is the most compelling argument for the hope that is in them. This is especially true in such an emotion-driven culture we live in today. The average millennial tends to be drawn to experience and emotion than logic and reason; “I’m going to do what I feel is right; I don’t care about the logic or reasoning behind it.” This is all the more reason to “let your light shine before others, so that they may see your good works and give glory to your Father who is in heaven” (Matt. 5:16).

Encouragement for Those Christians Who Are Doubting

Even Tim Keller says he doubts from time to time. Doubting is a good sign. God does not tell us to blindly accept what he gives us but graciously provides evidence of his goodness. Doubting strengthens our faith when we seek answers. Ultimately, we must ask the Lord to “increase our faith” just as the apostles did in Luke 17:5.

Recommended Readings:
Reason for God: Belief in the Age of Skepticism by Tim Keller
Mere Christianity by C.S. Lewis

TL;DR
• Apologetics is a great tool to defend your faith!
• Scripture exhorts us to “always being prepared to make a defense to anyone who asks you
for a reason for the hope that is in you.” (1 Peter 3:15)
• Do it with gentleness and respect! No one likes an angry and disrespectful person!
• The way you live your life is the greatest proof of the hope that is in you!
• Doubting strengthens your faith when you seek answers!