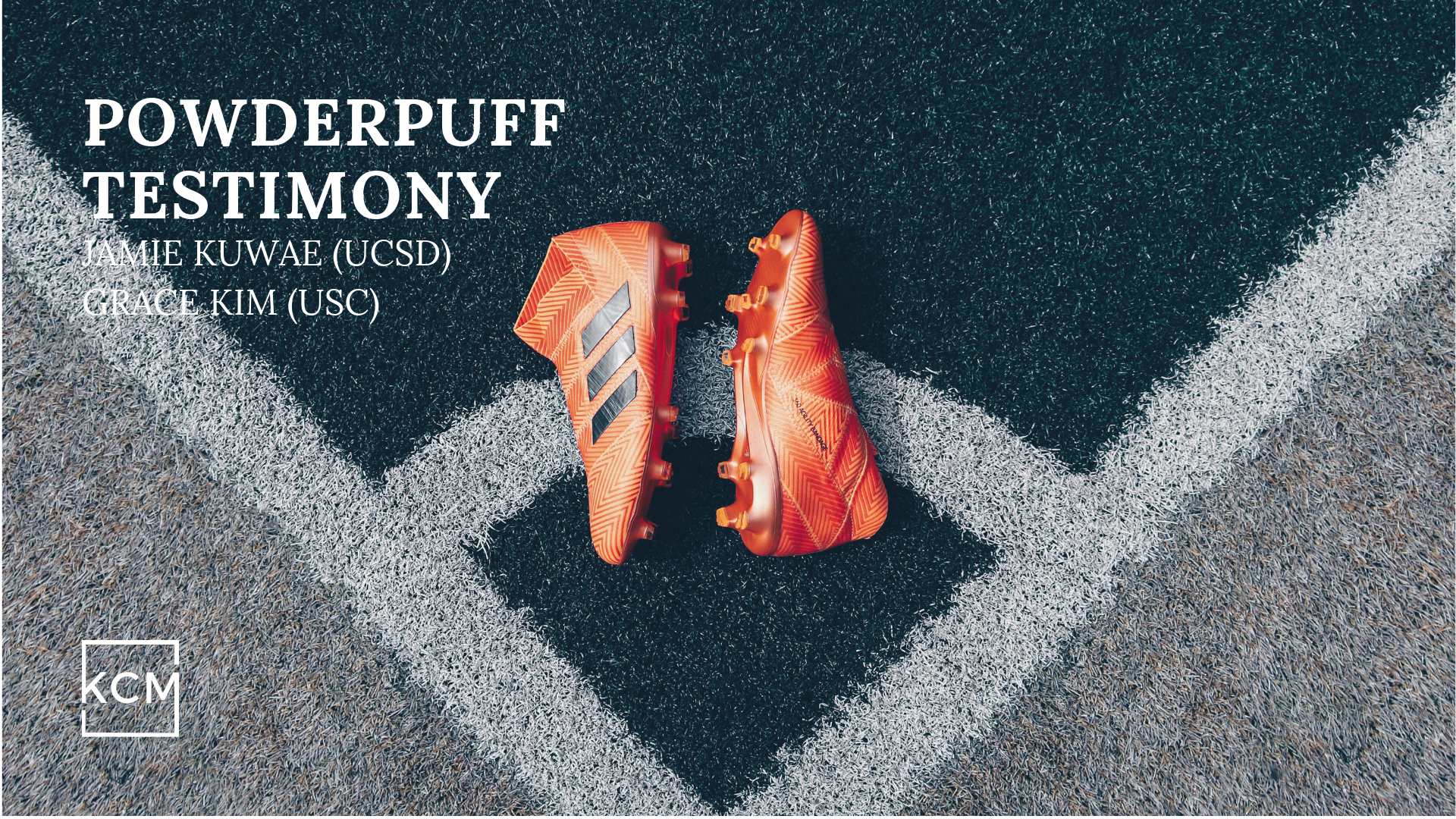 With Powderpuff coming right around the corner we have two special testimonies of students who have personally been blessed from Powderpuff!

We will be featuring Jamie Kuwae and Grace Kim! Check out the rest of the article for their testimonies!

During my freshman year, a high school friend invited me to try powderpuff with KCM.

At the time, I was not Christian and was reluctant to get involved with a campus ministry. Having played basketball for twelve years, I jumped on the opportunity to return to and join a sports team.

From the very first practice, I felt at home. It felt good to run and be a part of a team again. However, I remember thinking that this team was slightly different from teams that I had joined in the past. It was a very subtle difference. I felt the difference when I would see a defensive player high-five an offensive player who had just scored. Or, when someone missed a flag and teammates would yell, “It’s alright, you’ll get the next one!” I felt the difference off the field as well. People would ask me how my week went or how I was adjusting to college. I had never been asked questions like that before. I had also never prayed that my team would “glorify God”.

In the past, my team only cared about winning. The desire to win used to be the glue that bonded me to my previous teammates. As a result, my teammates only valued me for what I could do on the court. They could care less about listening to my struggles. All that mattered was whether I could perform. However, powderpuff was different because the common goal was different. The ultimate goal of powderpuff was not necessarily to win, but the goal was to build relationships with one another that would reflect the love and care that our Heavenly Father has for us.

Powderpuff helped me experience sisterhood in a way I never had before. Regardless of my athletic ability, my team encouraged and supported me on and off the field. Through powderpuff, I met sisters who would eventually share the gospel with me and talk with me about my faith. Powderpuff was one of the many ways God introduced me to faithful witnesses. As a non-believer at the time, I was able to experience God’s gracious, unconditional love without being in a foreign, intimidating environment.  Powderpuff showed me that Christians are capable of competing and being incredible athletes in a way that is different from most. This made me think to myself, “I wonder why that is…”  This curiosity led to more questions about God and, eventually, a profession of faith in Christ.

Because of powderpuff, I discovered an unexpected love for football. But more importantly and yet equally unexpected, I also discovered a love for God.

I didn’t play powderpuff football during my freshman or sophomore year.

I wasn’t planning on playing powderpuff this year either. I tried to stay really lowkey about it so I wouldn’t be drafted, but since the USC team was really short on numbers, I was heavily persuaded by both the coaches and the players to come out to at least one practice.

Anyone who knows me knows that I’m not huge on working out or playing sports. The only real time I sprint is to get fresh pizza from the dining halls, which is why I was honestly really scared to go to practice. But as practice progressed, I realized why so many girls who played powderpuff in the past vouched for it so much. It only took one practice to make me feel an instant sense of camaraderie with all of the girls on the team, even those who I had met for the first time that day. I’m not going to lie, after that first practice I was sore for a week and couldn’t even scratch my back properly. Still, I had no regrets because there’s something about running drills together and encouraging each other during difficult conditioning sessions that really brings people together. I personally find that during practices I am able to bond with both older and younger KCM girls who I do not normally see or hang out with, and I know many girls who formed strong friendships with people they met through powderpuff.

Something I really like about powderpuff is that, although we would of course like to win and get very excited after successful plays, winning has never been the point of playing. Our coaches this year haven’t been putting pressure on us to get everything perfectly; rather, they encourage us, show us patience, and sacrifice their time to teach us rules and techniques. Even when I trip over grass or fly to the ground, everyone picks me back up again and hypes me up. I think opening and closing practices with prayer really reminds us that this is about sisterhood, fellowship, missions, and sets the tone for the practices. We may be cold and out of breath, but we are cold and out of breath together!

While I’m nervous about remembering the techniques on game day, I’m just so grateful for everyone who pushed me to give powderpuff a try. Even though I was in KCM since I was a freshman and served for the past two years, I didn’t quite understand what people meant when they told me that powderpuff is a special bonding experience; but trust me when I say that sports bring people together in ways that weekly fellowships after GMs can’t!

If you are a sister and have never played before, I encourage you to give it a try! It’s a great activity that creates friendly competition, fellowship within and between campuses, and school pride. So many of my friends have told me they feel so encouraged by their campus KCMs when they see their brothers and sisters supporting on the sidelines on game day. Also, money raised from powderpuff fees will go towards supporting KCM’s STSM program trainees. Catch me on USC O-Line how bow dah!!

Powderpuff is this Saturday 2/16 at Henry Boisseranc Park!

Come cheer on our sisters as they play football!

The Powerful Comfort of Support Groups

The Silent Struggle: Women in Lust and Sexual Sin