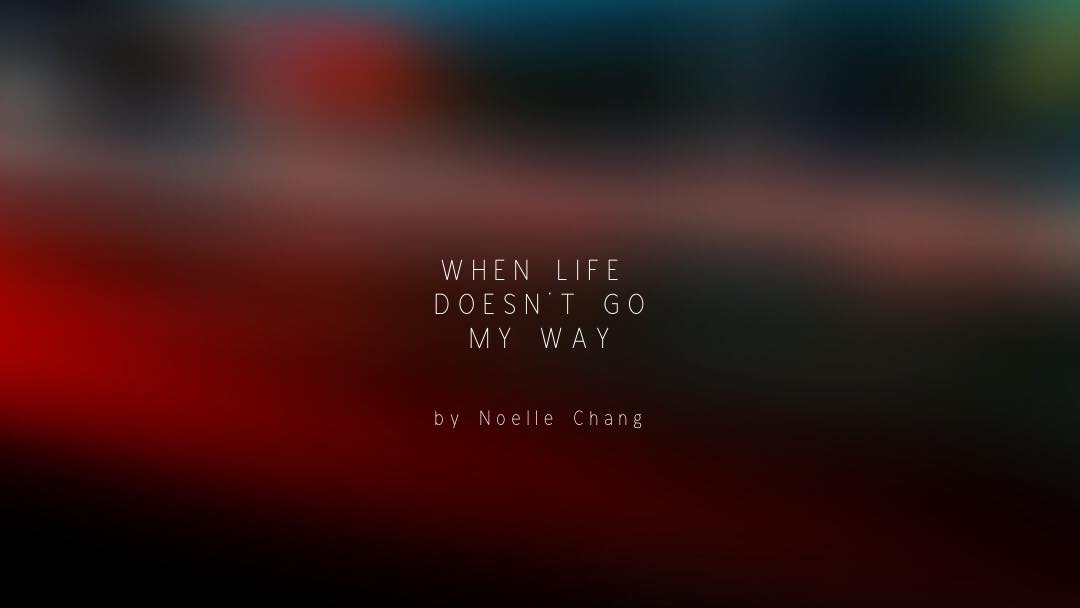 When I look back at college, I see how much I’ve learned during my four years there. Whether you’re a freshman who has been in college for only a few months or if you’re a big bad senior who has been in the game for four years, you can probably say that you’ve had your own share of lessons that you’ve learned in college. Amongst the many lessons though, the one that I learned every year was that life usually doesn’t go the way you want it to. Whether it’s just a day’s schedule that gets disrupted or a year’s worth of plans that gets wrecked, it’s safe to say that college is full of surprises.

Maybe you can relate? Here are four things I would tell myself in college when things didn’t go the way I wanted them to go:

When this happens, see how you react. Is it with anger and frustration? Or is it with self-controlled action? This is actually a concept that is covered in Proverbs. It tells us that “fools show their annoyance at once,” but those who are wise are thoughtful in their response (Proverbs 12:16). Try to catch how you react when inconvenient circumstances come your way, especially circumstances having to do with other people. When it’s inconvenient, do you still choose to love those who are making things inconvenient? Or are you angered by the fact that they have inconvenienced you? Take a step back from being in your own head and ask yourself—is this something I need to use energy to be mad about? Or is this a situation where I can just let it go?

One subconscious message that I took into college was that I always needed to do better. To a certain extent, this makes sense. Our God is a holy God who also calls us to be holy. However, we also know that we cannot be holy out of our own strength; in the end, Christ’s grace is sufficient for us and it’s when we are weak that his power truly shows (2 Corinthians 12:9).

Oftentimes, when we beat ourselves up about not being good enough, it can turn into an unhealthy habit of wanting to better ourselves for the sake of our own standards and not because we want to live up to God’s standards. In the end, God’s standards, although immensely high, are also filled with grace. When things don’t go the way we want them to because somehow we have failed, we can often avoid a pity-party for ourselves when we turn the other direction and remind ourselves that there is grace that covers us, weaknesses and all.

3. God sees you and is compassionate towards you.

This was a concept that I knew in my head, but I’m not sure if I really believed it during a majority of college. Often caught up in our own heads and emotions about whatever circumstance we are in, we forget that God sees it all. He not only sees it, but he is also compassionate towards us as well.

Our God is a God who “heals the brokenhearted and binds up their wounds” and is also a God who “determines the number of the stars [and] gives to all of them their names” (Psalm 147:3). Not only does our God tend to the world as a whole, which includes the many, many stars in the sky, but he also sees each individual who is brokenhearted and tends to them as well. He sees the many, but also sees the individual. God sees you in your struggles both big and small.

4. Be honest with yourself and with God; it’s okay to not be okay.

This is one that I struggled with the most during college. There are bound to be times in college when painful circumstances come your way and cause life to go sideways. First, you’re allowed to feel your feelings and you are allowed to take some time to reorient yourself before moving forward. This does not mean that we should always wallow in our pain. Because at the end of the day, life is a battle. We must act wisely to balance emotional freedom with prayerful action.

When difficulties arise and you are hurting, angry, or sad, be honest with yourself. Be honest with how you’re feeling and face it before trying to escape it or numb it down with binging on food, alcohol, Netflix, sleep, work, etc. For me, it was difficult breaking this habit; therefore, I would want to tell myself (and you) this before the habit is set. In the Psalms, we are shown many times where the psalmist brings their honest, raw feelings before God (Psalm 10, 13, and 22 being a few). This is then followed by reminding and preaching to themselves of who God is, but before this happens, an acknowledgement and expression of what state they are in and how they feel comes first. Just as the psalmists were honest with God, we can also be honest with ourselves and with God.

The events that disrupt our lives can often serve as reminders to seek God and to put our hope in something greater than what this life has to offer. There will be many more times when life does not go the way we want it to. Through these moments, let’s try to remember that we have a God who is sovereign over all things, including our lives, and walk forward fighting to have faith in him.

A New Year for Women’s Ministry

The Silent Struggle: Women in Lust and Sexual Sin