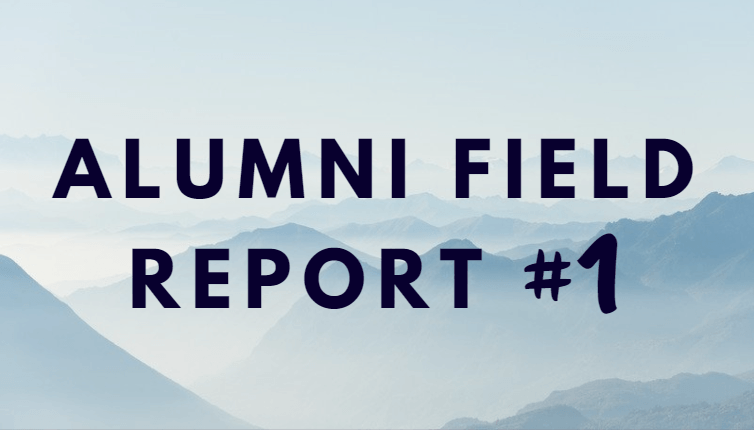 The Alumni Field Report series will highlight KCM alumni who are currently serving in overseas missions. This week’s report is from Justin Lee!

Hello! My name is Justin Lee and I am a KCM alumnus and former staffer. Most people know me better by my nickname: Tuba. KCM has given me the opportunity to share a bit about how God has been working in my life. I hope my story encourages you, particularly if you’re thinking about going on missions this summer or are in the process of making big decisions for the future.

As a freshman, I went on my first KCM STSM trip to India. India, as you might expect, was not easy. Some highlights: our team was stranded in Mumbai due to a massive flood, we all got sick due to drinking bad water, I jumped off a moving train, etc. All good story material. But more importantly, I learned two major lessons from this trip that have stuck with me even until now: (1) God is working in this world and it is worth it to join him in his work, (2) missions is not simply suffering or an experience but preaching the Gospel where it’s not being preached, something all of us, not only “missionaries,” are all called to do. Prioritizing these things has changed the way I’ve thought about my life and how I’ve made decisions. It has also led me to places that I’d never thought I would go and to do things I never thought I would do.

Around the time I was graduating from college, I realized that I didn’t have any concrete career plans or goals set for my life. I was a psychobio major at UCLA who realized too late that he didn’t want to go into medicine/pharmacy/dentistry. There was, however, one thing that I really wanted to do. I wanted to see China. Over the past few years, God had been placing China on my heart. I had read much about Christianity in China and how the church was growing rapidly despite persecution. And so, I thought, while figuring out my next steps, why not go and see what God is doing? Why not use the time I have to be useful and to serve his kingdom? So I went to China for a year to study Chinese and to help out missionaries there in whatever way I could. Over the course of my time in China, God showed me many things. But regarding future and career, he revealed to me that there was something that I had enjoyed and was good at, something that had been my “real” undergraduate major: ministry. People had asked me before if I’d thought about going to seminary. I’d always brushed it off, thinking of studying theology as something I could do later when I had more time and money. But I would do it now. I made the decision to enroll at Talbot for the next semester.

The next few years were a blur. I was a full-time seminary student, a youth pastor, and serving at KCM. I even led KCM STSM teams in the summer: China (3x), Japan, and the only KCM team to ever go to Turkey. While all of my trips were amazing and blessings in their own right, two of my trips to China had a lasting personal impact on me. In these trips we went to the west of China and worked with a church led by a pastor named Gary. Gary was a local brother who had come to faith through the ministry of Korean-American students like me. But Gary was struggling; he had become a pastor with only minimal training and was dying to learn more about theology and ministry. I really wanted to help him, so when I returned the second summer I brought theological books (in Chinese) as gifts. One of my teams also ran a VBS for a number of the house churches in the city, gathering together 40-50 kids. Talking to the teachers, the stories I heard were the same: lack of pastors, lack of training, lack of resources. Although the church was growing in China, they simply lacked teaching and training, the educational resources that we take for granted. Was this something that I could do?

A few years later, I found myself in a bit of an existential crisis (yes, pastors can go through crises). I had graduated from seminary and had left the church I was serving at. For a short season, I even served at a Christian charity ministering to Middle Eastern (mostly Muslim) refugees. But what would I do now? I’d never really felt called to be a pastor and I didn’t want to get back into pastoring just to pay the bills. So I decided to get a regular job. I figured that God wanted me be responsible, which means to have a stable job, pay off loans, and start properly “adulting”. After the disappointment of many failed job applications, I realized that this wasn’t actually what God had wanted. Rather, it was the worldly idea of wisdom that I had imposed onto God, assuming that all God wanted was for me to make reasonable, responsible, and logical decisions.

After revisiting and reevaluating the question of “what should I do next?” or “what does God want me to do?” (i.e. praying) I found myself being led back into studies. I had been good at seminary, I had enjoyed studying theology. Again, I had earlier considered further theological studies, but had tabled this idea for when I had more time and money. But in this particular season, God was challenging me to follow him, to risk financial security and job prospects. He was asking me whether or not I’d be willing to leave my family and friends, the comforts of home, in order to grow and develop the talents and passions that I had. Would I be willing to make decisions that seemed foolish by standards of worldly wisdom in order to become more useful for God’s kingdom purposes? So without really knowing what to expect, in faith, I packed up my stuff and moved to England to pursue doctoral studies in theology.

And God provided. I enrolled at one of the top theology programs in the world. I found an amazing supervisor and a dissertation topic that was both interesting and relevant. Academically, I found success in my studies and was continually affirmed by colleagues and superiors. I met good friends and was surrounded by a strong church community. I was even able to travel the world. Financially, God confirmed this decision by providing me with a job that gave both free housing and food throughout my time in England. Overall, I had a relatively trouble free and fruitful PhD experience, even finishing early. In the brutal and competitive world that is academia, he provided a post-doctoral opportunity in Germany at another top theology school. Just to give you some context: last year I faced a slew of job application rejections; one position had over 140 applicants for one spot, another over 150.

And God continues to provide. Currently, God has opened up another door, one which seems to be a culmination of the many things he has shown me over the years. I have been offered a position teaching theology at a seminary in Singapore called Singapore Bible College. The mission of the school is to train Asian church leaders to edify their churches and reach the unreached in their home countries and contexts. The school serves as a regional theological hub, bringing in students from all over Asia, but especially from China. If this opportunity isn’t divine providence, then I don’t know what is. In so many ways, it seems that God has been preparing me for something just like this. I will begin in the summer, after I have wrapped up teaching in Germany.

My story may sound like it has been an easy journey, but it has been far from it. I have faced my fair share of struggles along the way, of loneliness, doubt, inadequacy, and even distance from God. In these times, I’ve come to recognize my own weakness and inability and have learned to lean on God more fully. I’ve had to trust in him despite things not making sense logically or even financially, despite things seeming impossible. I’ve come to recognize that such struggles unearth the idols and sins that distance me from God. And I’ve even been able to see more clearly the particular struggles that come from having grown up in the bubble of Asian-American Christianity.

My encouragement to those who have been patient enough to read this far is this. The culture we live in is one obsessed with comfort. The future is uncertain, especially in our current situation. Our natural tendency is to seek comfort and certainty. But the nature of faith is to trust in God despite discomfort and uncertainty. Choosing what is easiest and most convenient and most comfortable usually seems like the best way, but it often doesn’t require any actual faith. Making backup plans in case God’s plans don’t work out is not faith at all. When you step out in faith, when you entrust God with your future, your career, your hopes, and your dreams, then you will truly see God’s faithfulness and goodness in your life. With that first step of faith, the second becomes easier, and even the third. The headache of “discerning God’s will” becomes simpler and it becomes easier to recognize when God is opening a new door. If you put his kingdom first, God will use you in ways greater than you could have ever imagined. Rather than denying your passions and dreams and talents, God wants to redeem, refine, and amplify them for his purposes, to bring out the greatest potential that you have.

To conclude, it’s unlikely that any of you will do exactly what I do. We’ve all been made in different ways and have all been called to different things. But I hope that my story has helped you to see that God is working powerfully in the world today. I hope that you know that there are people just like you who are out there in the world, dreaming big dreams and doing big things for God. And I hope that God will give you your own visions and dreams, as well as the faith and patience to see them unfold into reality. For those going on missions this summer: serve selflessly, humble yourselves continually, learn voraciously, and dream big. And don’t let yourselves forget the lessons you learn. For those graduating or struggling with next steps, first ask God what he wants and continually check your own heart. Recognize and remember the gifts, talents, vision, and convictions God has given you – he does not give them without reason. And trust in him, really trust in him, especially when it’s hard.

Keep the faith, dream big dreams, and don’t be afraid to hit me up.

Joy in our Singleness